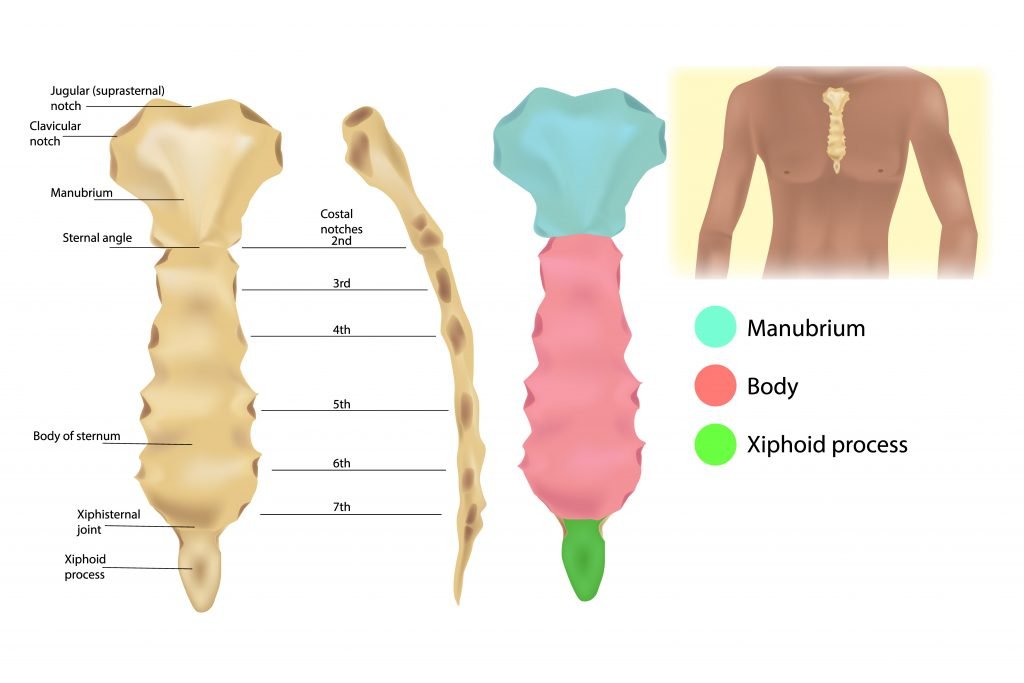 The sternum (aka breastbone) is a flat bone located at the anterior midline of the thorax.

Embryologically the sternum develops from a left and right cartilaginous plates that unite in the midline. It was named after the word ‘Sternon’ which means chest in 17th century Greek.

It articulates with the clavicle and the costal cartilages of the upper 7 ribs (true ribs), while the 8th, 9th and 10th ribs (false ribs) are indirectly attached with sternum via costal cartilage of the ribs above.

Parts of the Sternum

The manubrium is a large quadrangular shaped bone that lies superiorly to the body of the sternum.

The costal cartilages of the first rib and part of the second rib also articulate with the manubrium, and they fit into facets on its lateral border.

The lower border of the manubrium articulates with the body of the sternum at the sternal angle. This is where the second pair of costal cartilage attaches to the sternum and at the level of the inferior border of T4.

Clinically this junction is known as the Angle of Louis.

The body is the largest part of the sternum.

If you are feeling fancy with your friends – it is also called the gladiolus!

The sternocostal head of the pectoralis major muscle attaches to the sternum, on its antero-lateral surface. The transversus thoracic muscle arises from the posterior surface of the body.

The xiphoid process is the pointed tip at the inferior portion of the sternum. The cartilaginous manubriosternal joint and that between the xiphoid and the body of the sternum may also become ossified after the age of 30.

In some individuals, the xiphoid process articulates with part of the costal cartilage of the seventh rib. The anterior surface of the xiphoid has attachments of fibres of rectus abdominis muscle and aponeurosis of internal and external obliques.

Since the first rib is hidden behind the clavicle, the second rib is the highest rib that can be identified by palpation. Thus, the sternal angle and second rib are important landmarks for the identification and counting of the lower ribs.
This website uses cookies to improve your experience. We'll assume you're ok with this, but you can opt-out if you wish. Cookie settingsACCEPT
Privacy & Cookies Policy