How do you tell if someone is alive?

Check they are breathing!

Thus brings us to our next main respiratory organ – the lungs.

We have two lungs – RIGHT and LEFT. They are located in the lateral aspects of the mediastinum within the thorax. They are surrounded by the pleura.

Unlike other paired organs in the body the right and left lungs are NOT mirror images of each other. 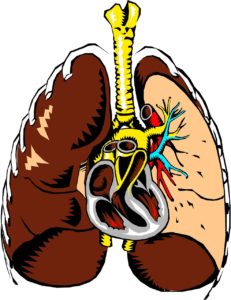 First let’s look at the structures that both lungs have. You may be given specimen of the lung in your MRCS exam and asked to identify its’ structures, orientate it as in-situ. These are the basics of how you could describe the structures and help position the lung in the body

This is the blunt tip of the lung at its most superior aspect. You need to always remember it projects upwards beyond the first rib so can be injured easily during procedures such as central line insertion.

The inferior surface of the lung, sitting on the diaphragm

The right and left lungs do not have an identical lobular structure. 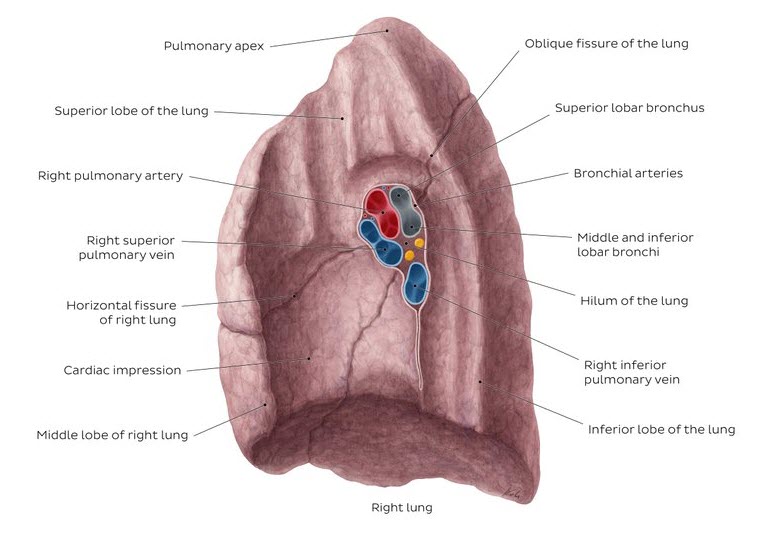 The right lung has three lobes; superior, middle and inferior. The lobes are divided from each other by two fissures: 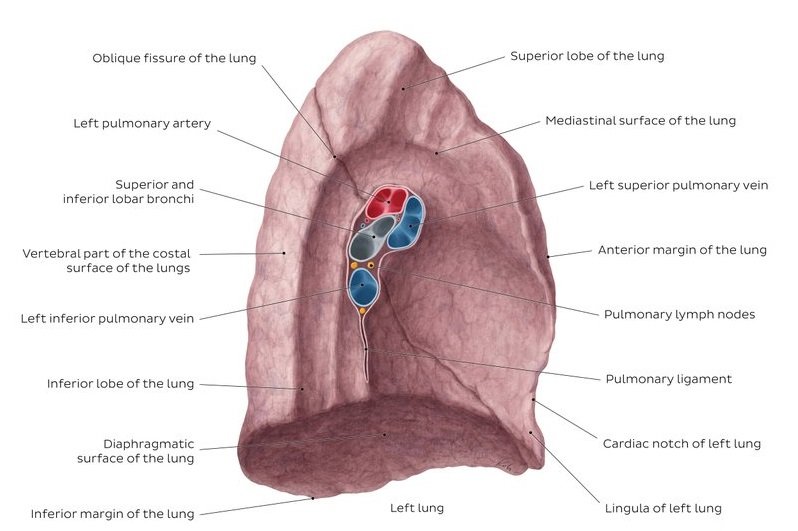 The left lung contains superior and inferior lobes, which are separated by a similar oblique fissure. The lingula (little tongue) may be seen as homologous to the middle lobe.

These are the edges of the lungs corresponding to its anatomical position – anterior, inferior and posterior borders.

This tells us which area the lung is facing or rather what their adjacent neighbouring structures are.

The major function of the lungs is to perform gas exchange, which requires blood from the pulmonary circulation.

The pulmonary artery arises from the pulmonary trunk and carries deoxygenated, arterial blood to the alveoli.

The capillaries branch and follow the bronchioles where they meet the alveolar wall, creating the respiratory membrane.

Once the blood is oxygenated, it drains from the alveoli by way of two pulmonary veins (superior and inferior)  which arise from each lung, carrying the blood to the left atrium of the heart. From there, the heart pumps out oxygenated blood to the rest of the body.

The lung parenchyma is supplied by the bronchial arteries.

Bronchial arteries are variable, but there are usually two for the left lung, which typically arise directly from the descending aorta. There is a single right artery which may arise from the aorta, from a common trunk with the left bronchial artery, or from one of the upper intercostals, the subclavian or the internal thoracic artery.

These arteries run along the posterior aspects of their respective bronchi as far as the small bronchioles. However, the alveoli, and thus the respiratory epithelium is entirely supplied by the pulmonary arterial tree.

Because the lung stroma receives its blood supply from the bronchial arteries it remains viable following a pulmonary embolism (which is a blockage in the pulmonary arteries therefore affecting gas exchange).

The bronchial veins – right and left (usually two each side) empty into into the azygos and hemiazygos veins, respectively. 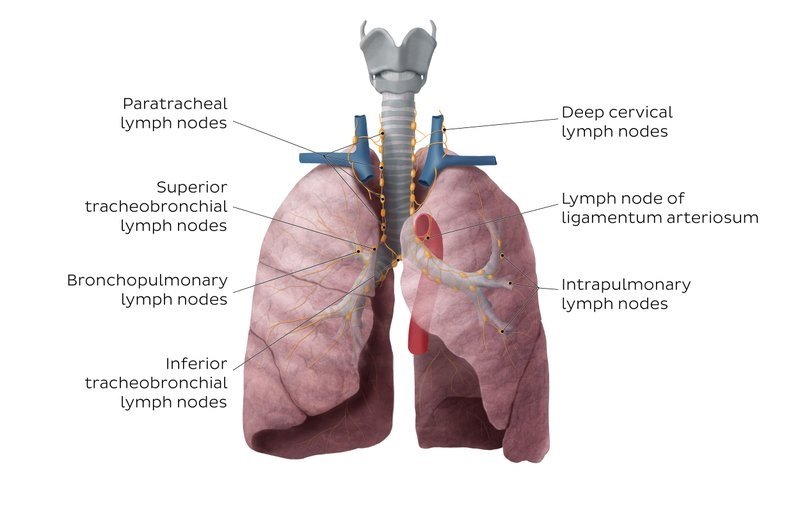