The anterior longitudinal ligament runs from the second cervical vertebra to the sacrum along the front of the vertebral bodies. It is adherent to the anterior surfaces of the bodies and intervertebral discs.

Ligamentum flavum (or ‘the yellow ligament’)

The interspinous ligament is a thin membranous band that connects adjacent spinous processes It lies in a sagittal plane and extends from the supraspinous ligament posteriorly to the ligamentum flavum anteriorly.

The supraspinous ligament is a band of longitudinal fibres connecting the tips of the spinous processes. It runs from C7 to the sacrum. It is continuous with the interspinous ligament anteriorly and the ligamentum nuchae superiorly.

The intertransverse ligaments link the transverse processes of adjacent vertebrae 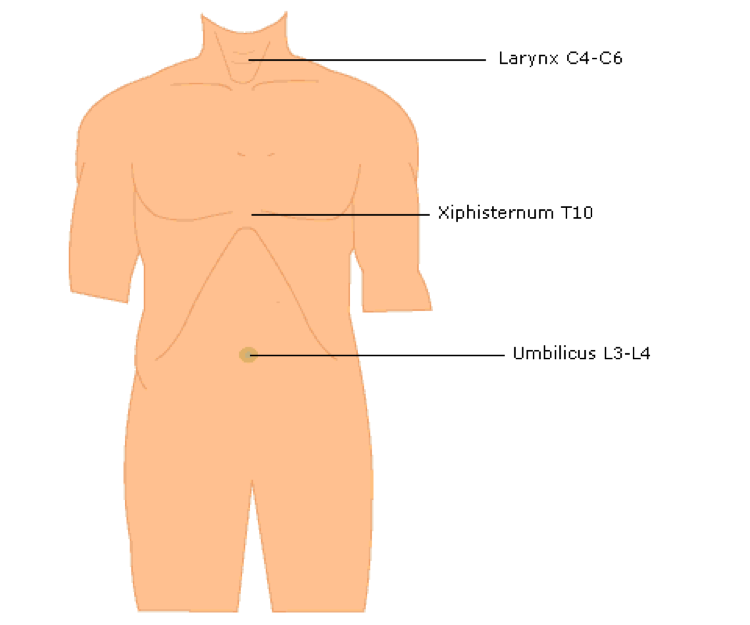 From top to bottom, the first spinous process that can be palpated through the skin of the back is that of C7

The spinous process of T1 is the most prominent

When the arms are by the sides, the root of the spine of the scapula is level with the tip of the spinous process of T3

The tops of the iliac crests are level with the body and spinous process of L4 . However, in the elderly, vertebral body fractures and ‘slumping’ of the spine into the pelvis can make this landmark inaccurate. Likewise, in the morbidly obese, adipose tissue on top of the hips can make the iliac crests appear more cephalad.

These dimples overlie the posterior superior iliac spines which form an equilateral triangle with the sacral hiatus.